I choose ‘FINK’ as our theme colour, since DearDear has  Baju Melayu pink recently already made but belum sempat pakai.

Thanks to Anne for sewing the Baju Kurung forAmani.

The picture was taken during early in the morning of raya, before the flu and  the crying drama started. =p

After this picture was taken, Amani started to cry. This is the only ‘the best’ shot from three of us. huhu.

Cried cried, don’t want other people to pujuk. Mama had to do the stand up comedy.

And then Mama laughed alone. wuwuwwu….

On the second day of raya, we went to Lundu. Visiting relatives from my mother in-law side. No pictures were taken. Tired woo…. reached home around 10pm.

On the third day of raya, went to some friends’ house and to my sister house. No pictures were also taken. Tired tired also…

On the fourth raya, we went to my side of relatives. This picture was taken before visiting the first house on that day.

After that, Amani poo poo and smeared her dress. Aiyaaa…. had to headed back home and changed dress (nasib baik rumah dekat).

Raya without visiting my best friend (now she is my cousin in-law. =p) feels incomplete.

After changing Amani’s dress, we went to visit Ayu and Ee.

Amani loves the Dafa Fish (started in Wa Timah’s house actually), first time experienced herself holding and eating the snack on her own.

After that we straightly went to my relatives around PJ areas.

The last house we went was here. In my Aunty’s house.

Amani was getting hyper in this house, might be caused by the sugar rush. muhuhu.

On the fifth raya, I got gastric attack and followed by Amani’s fever and diarrhea. wuwu..

Okay, that’s my raya wrap up.

Would love to hear yours. =)

Ever heard a word Dabei?
Or Dabai?
It’s a type of exotic fruit, mostly can be found in Sibu. (My hometown).
My mom just came from Sibu and she brought this fruit. Oh my temptation… 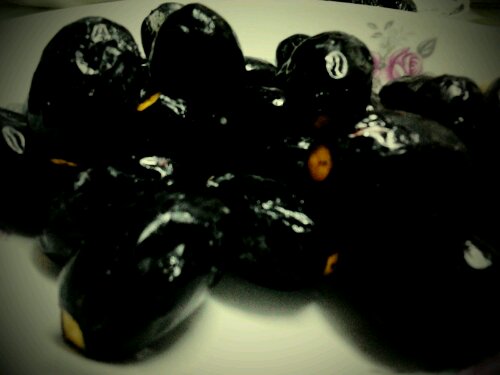 Looks ugly isn’t it? Wait until you have taste it.
Lemak berkrim. Ahaha.
It’s already the beginning of Dabei Season. So don’t be surprised if you heard the price are still as high as RM30 per kg.
But it’s a worth buy.

I remember when I was still a kid, I would followed my grandmother to the wet market. During the Dabei Season you would hear they were shouting “Dabai dabai dabai!!!” until I heard them as in “Labai labai labai!!” 😛

No wonder she had fever and diarrhea. She even lost her appetite. Two days, she had rejected her meal. Been trying to feed her rice porridge and mashed potato. She just locked her mouth. It made me worried.

So I made some homework. Figured out that finger food is the solution. 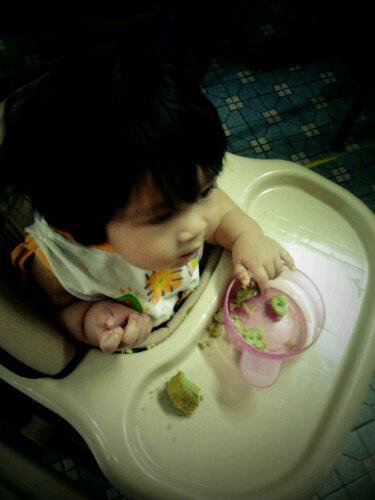 For breakfast, I tried giving her muffin. While playing around with the muffin, she is slowly eating it. Looks like she enjoyed it. 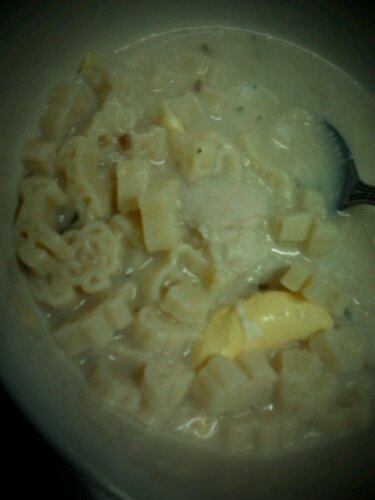 And then I tried a new recipe for her lunch. This is called “Pasta Porridge”. Ahaha…

I’m using Organic Children Pasta (Can buy from Cosway), the gravy is made of mushroom soup and I add in some dori fillet.

First, I introduced the fillet for her. While she hold and munch the fillet, I chip in feeding her the porridge in between.

Nom nom nom. Surprisingly, Amani finish her meal! Mama is relieved now, but everytime had to figure out new recipe for Amani lah…

Amani’s next temptation is….

Should have updated about this post a while ago.

But I was stick with the 30 day book challenge that time.

So here I want to share what I’ve got from the” A Second Time Around Book From USA, Book Fair”.

Sikit kan? I went only twice and managed to grab 5 books. Pity me! 😦

I had to limit my expense that day due to raya preparation.

I want to train her to become a book junkie junior. hehe.

Hopefully next year, I can bring her along to the book fair.

Let herself choose her favourite book.

(While me going crazeeeee at the fiction section. mwahahahaha)

On the 5th raya, I got gastric attack.  The worst la within this year.

I couldn’t got up from bed. Sian Amani that day, lack of love from me…

The day after that, Amani pulak cirit-birit and followed by fever.

Sorry for the invitations from friends & family which we couldn’t attend.

Have to extend my ‘cuti’ until Tuesday if she’s not getting well.

It was the first raya for Amani.

Yawn!!! Yess I’m still here stucked in the office. While others already have enjoy their holiday. 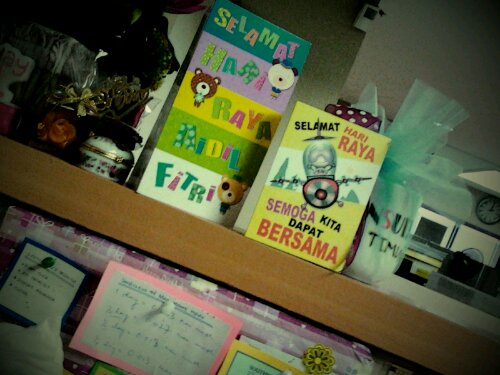 The office sounds so quiet. My body is sitting here, but my soul is straying everywhere but here. huhu.

By the way. Thanks for the greetings card! (Daydeq, Ain & Freda). Sorry for not replying your cards. Except for Ain, she got a special card from me. hehe. 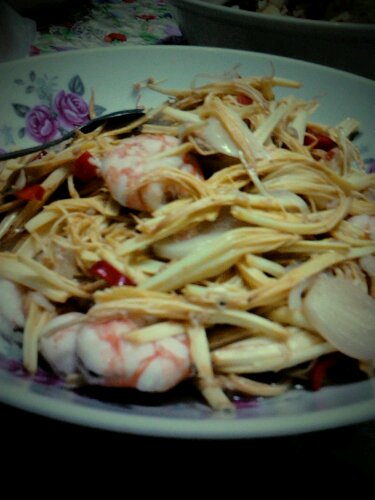 Remember yesterday I’d posted on the Bunga Durian? After coming back from work I terus make this dish. I add in prawns. Yummeh!!

Today might be the last day of working before Hari Raya for some people. But not for me. muhuu… I have to save my leave for my cousin’s wedding at the end of this year. 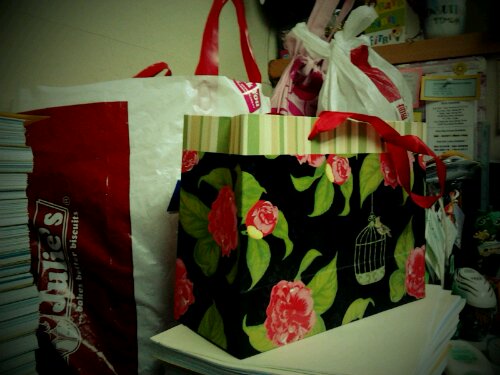 Thanks to my colleagues for the Raya Goodies. Very thoughtful!

And the best goodies I received today : 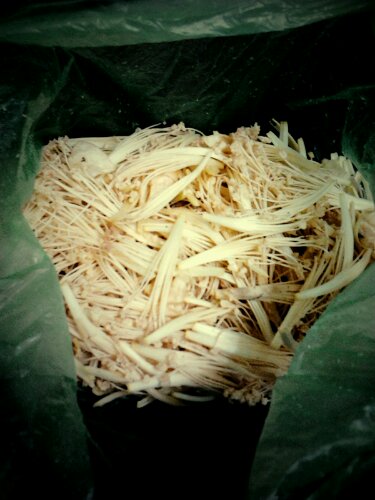 Bunga durian (Durian Flower) fresh from the orchard. It was from my office colleague as well.

I bet not many people knows about this type of flower. It can be cook like ‘Sayur Midin’. Stir fried them with belacan (shrimp paste).  Add some young corn.. Fuuh… Daaap (as in Amani’s).

This is my iftar menu for today. 😉

Recently I found that mostly bloggers love to wrap up their weekdays activities into pictures. I’d love to try posting my week just like them. It will look more fun reading blog with pictures aye. 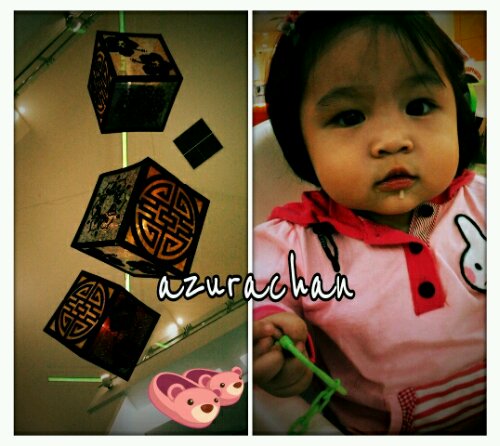 1. Hanging cubes – Found them at the Boulevard Mall, Kuching. I love perspectives. It’s been a while since the last time I took pictures.. huhu.

2. Amani Chan – This week she is 10 months. And now she is weight 10.2kg. muhuhu. Trying hard to stand up on her feet, non-stop talking and love teasing people. Her favourite words now “Daaap” (Sedap), “Tekkk” (Cantik..). She also loves to slap on people face. A hard one! 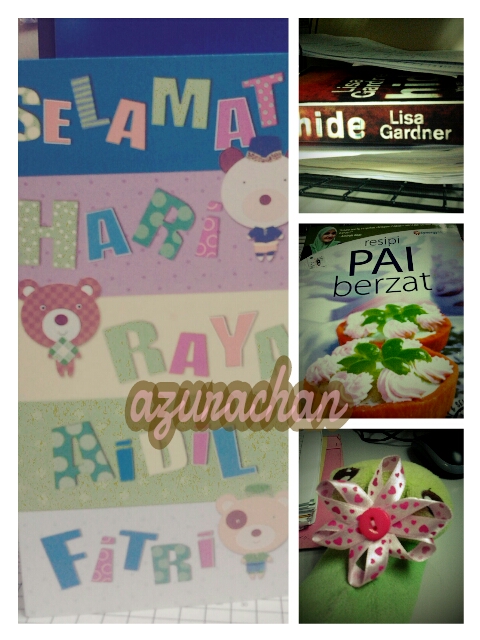 Clockwise:
1. A cute Hari Raya Greetings Card from Ain. Thanks dear. I remember during my younger times, I love writing greetings card. We would bought the cards and wrote them during Solat Terawih. hehe…

3. Recipe book – Eheh. I love pastry. Would love to try making the tart shell own my own. I’ve tried but always failed. Hopefully with this book, I can improve my skill.

4. Cutie brooch for Amani – It was from Ain. Can’t wait to attach on Amani’s baju kurung. 😉

I love encyclopedias, book about the discoveries of our world. The best coffee table is the National Geographic. Read them in somebody’s house. I couldn’t remember but I know I enjoy reading it.