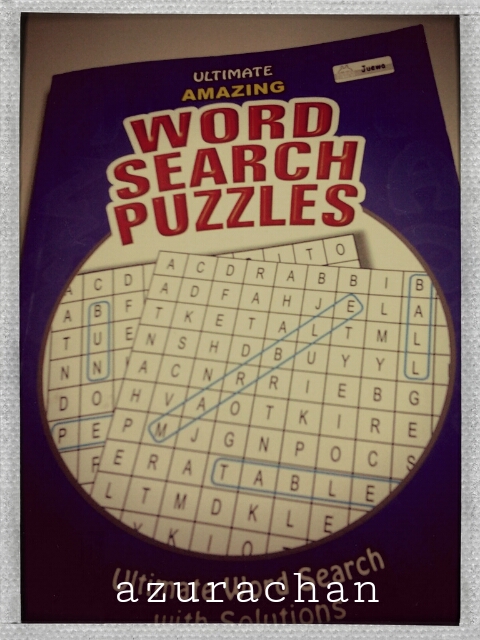 Word search is my favourite game. Be it from my handphone or from the books, whenever I have free time I would do the searching. Perhaps for some of you it might be easy game to challenge your mind. I don’t mind. I just love doing the word searching. Sometimes I learn new words as well. 😉

Backerei is the name of a bread shop. I’m not sure from what language it comes. Do you know? I guessed it means Bakery. 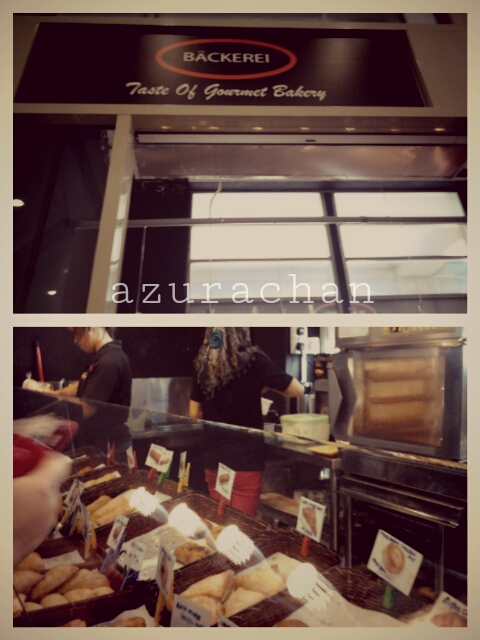 Located at the first floor of Wisma Tun Jugah. At first I thought it was a commom bakery. One day, when I passed by the shop, the smells really attracted me. 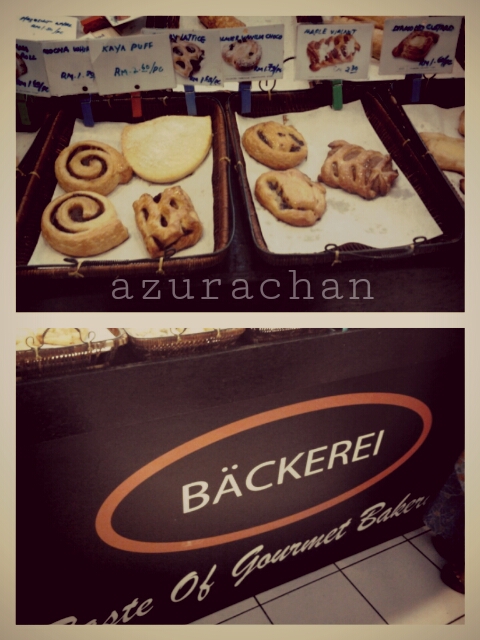 When I entered the shop, I found that there were so many types of bread. Very different from what we always found in local bakery. 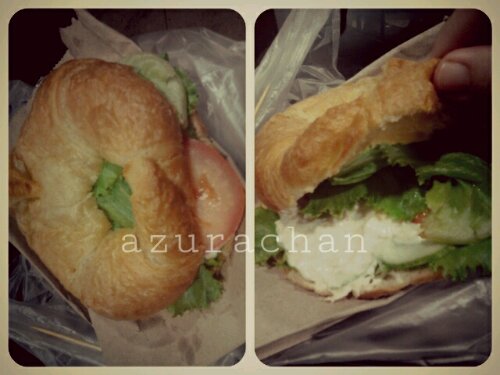 They also served sandwiches, soups… that day I tried Chicken Mayo Croissant. Taste so good. The bread were very soft. I also have tried their Chicken Mushroom puff, Vanilla choco bread and more (once eaten, I forgot the name. Lol!).

p/s: I love the smell of breads…

How was your weekend?
Mine was as usual – packed! Other people might enjoying and relaxing on the weekend but not for me. However I don’t regret it because weekend is my quality times. My full attention distracted by my family. 😉 This would explained why my blog isn’t updated for two days. muhuhu. 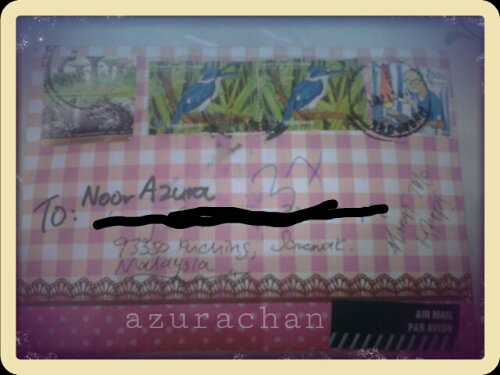 Last Friday, I received this parcel and it made my day. I knew who it was from and I didn’t feel curious about it. 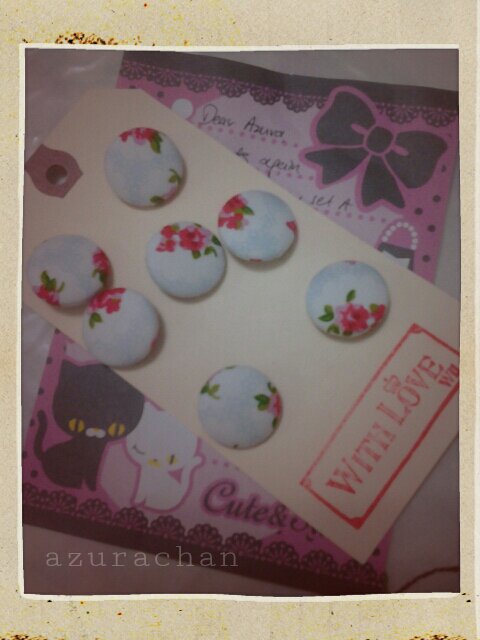 Yeah, it is the giveaway gift from Angela, whom had hosting the giveaway early on this month. So I won the Set A button, which is soo lovely! 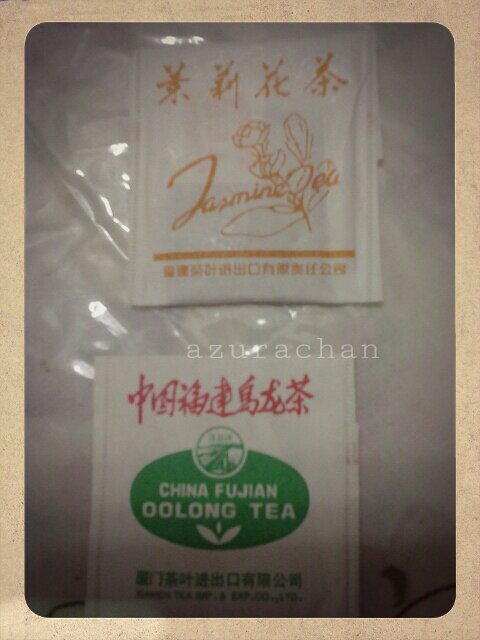 Surprisingly, there’s more gift. She also included two types of tea from Singapore. It was very nice of her. Thanks so much!!!

I have postcards and few souvenirs for you. Just wait till it reaches into your mail box. hehe. 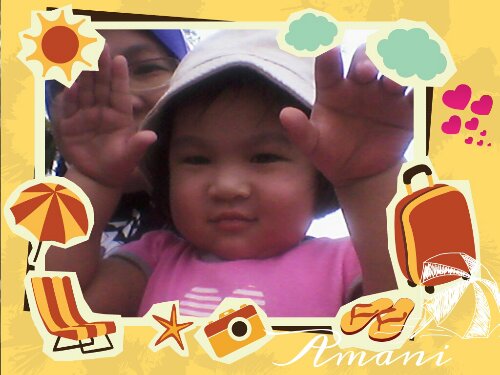 Is bleeding gums normal during teething?  I mean for toddler.
Have you had any experience with jutting out gums?
Sound scary huh?

But that is what happened to Amani few days ago.
That night, she was eating snack and then she told me something was stucked on her teeth. As usual, I would helped her to get rid of the food but that night I couldn’t get rid of it. So I took her toothbrush and started to scrap scrap her teeth. Then I realised there was blood on the toothbrush.

I thought it might because I brushed her teeth too hard. I started to worry. She looks uncomfortable with the ‘thing’ in her mouth so she put her finger inside. I was so geram so I scolded her not to put fingers in her mouth. And then she started to cry. At that time when I saw her, her mouth was covered with blood. I started to panic.

I made her lay down and grab a torchlight. Getting worse! I found that her gums was jutting out!!!! I’m a panic person, I couldn’t think properply. I cried too. 😥

DearDear was the opposite. He’s too cool to handle something like this. I hate a cool person, when it comes to situation like this.
DearDear only responsed “It’s normal, she’s just like me when I was a kid. The gums will slowly turn back into its position.”
I was like.. “Nooo! It’s not normal, can’t you see it??”
(OK. I’m the worst person to handle emergency cases. I admit. Lol.)

“Bring her to the clinic!” I said.
So off we went to the clinic. The doctor looked into her mouth and his face was surprised. “OMG, what’s this?” he said.
He advised us to bring her to the dental clinic.
Not my lucky day I guessed. My flu was getting worst that night and I had a mild fever.

The next morning, we went to Dr. Liew Dental Clinic.
It was a long queued. Had to wait nearly two hours. Luckily, Amani acted so normal that day. She didn’t bothered to put her fingers inside her mouth. I bet it wasn’t painful.

So when it was her turn, I told the dentist about the situation that night. The dentist looked inside her mouth and he said “Nothing strange inside. Just teething.” I wasn’t satisfied, I told him her gums is bleeding and jutting out. He said it’s normal.But it’s bleeding, I told him. He said it’s normal too, maybe she felt itchy so she tends to put her finger inside. Oh no. Not another cool person I had to face. huhu.

Weird! That was I thought, until today. Yesterday I looked into her mouth and miracle-ly found that the jutting out gums had turn back into its position. No wonder the dentist said it was normal.

Weird weird weird!  Parents outhere, please share with me if you ever encounter a situation like this? Is it normal? Thanks in advance for the infos and advices. 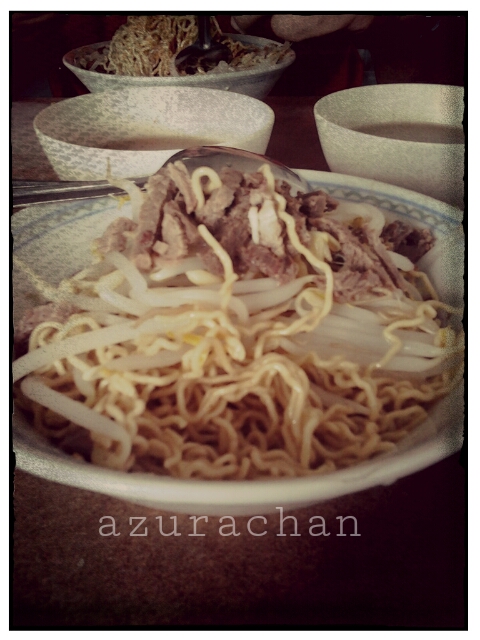 If you’re Kuching townies, I bet you must be familiar with this place. Located at Satok Flyover, in between the carpet store and Satok Flyover cafe. You’ll find Sepinang Sari.

I remember my father always brought me to eat here. The Mi Sapi was very famous back then. Yesterday me and DearDear brought Amani to the dentist, which was on the 2nd floor of the building as well. After that, we chose to have lunch at Sepinang Sari. I prefer normal Mi Sapi while DearDear ordered Mi Sapi with Tendon. It was very pricey compared to the last time. Now it’s already cost RM4.50 & the Mi Sapi with Tendon was RM7.++ Sigh~

Yeah compared to the last time, the taste now has lost its’ kick. I think it might be because the daughter had take over to run the business. Last time it used to be the owner, Hj Salleh who cooked for the customers.

Nevertheless, it is still nice. My cravings has been fullfil. Wehehe.

Lately I am busy with my craft projects and I have to put aside my ‘drugs’. The dateline is just around the corner and it stole my sleeping time. At last, I am end up laying on my bed with flu and fever.

Thought of resting at home and having my me time. Instead, had to rush to the dental clinic because of Amani’s bleeding gum. Sigh~ Will update on that story later.

At this moment, I am struggling to put her into bed. Now I have my time for my October drug… 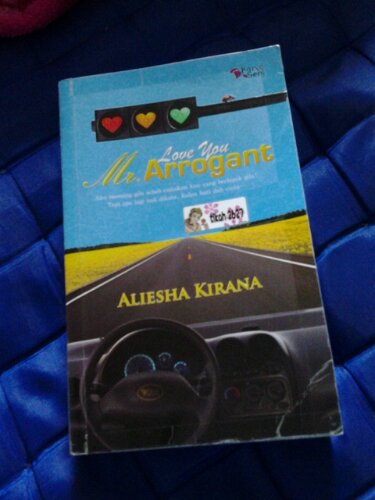 It’s a Malay novel, Love you Mr. Arrogant by  Aliesha Kirana. I borrowed this book from Tikah. If you’re a fan of Akasia slot on TV3, I bet you must be following the current drama which was adapted from this book.

That’s all for today. See ya. 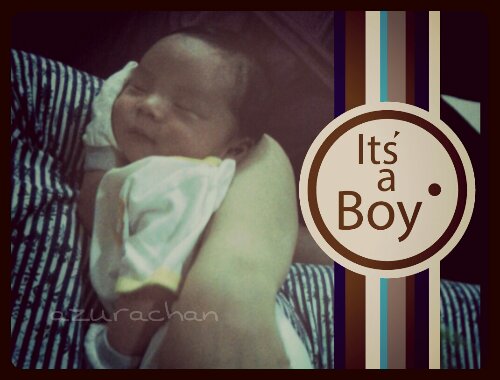 Ding Tea! Ding Tea!
I am addicted to Ding Tea. 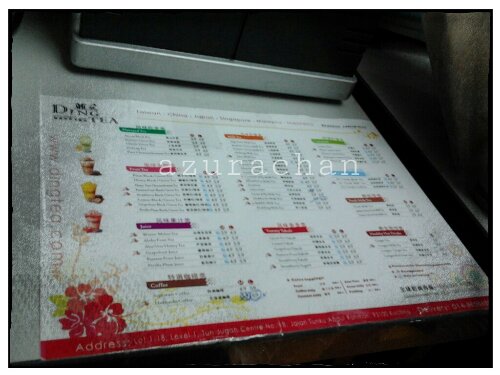 Nah, ambik ko. I even paste the menus on my office table. muahaha. It’s for inspiration! Lol. 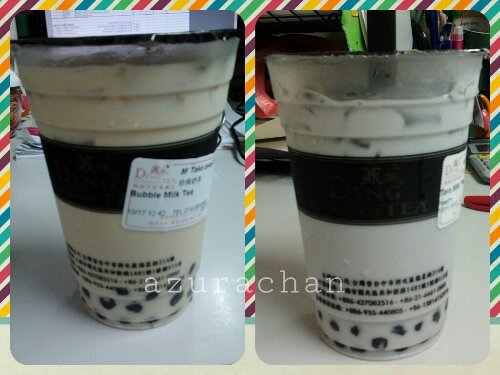 Among all, my favourite was Bubble Milk Tea. I’ve tried Taro Milk Tea (Yam flavour) & Hokkaido milk tea. All were too sweet for me. I prefer something light like Bubble Milk Tea. Plus, the price is cheaper because no need to add Pearls on it (extra charge for add on Pearls). 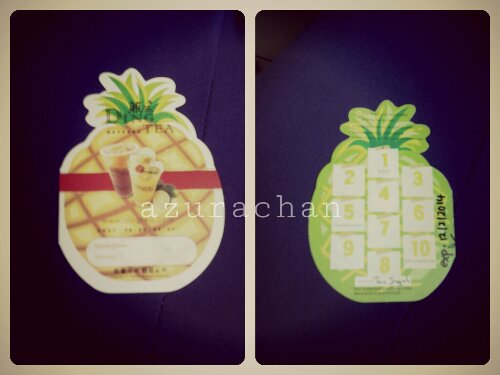 Recently, they gave me the Ding Tea card. Collect all chops and get 1 free drink. Valid until February 2014. Aiyaa.. easy leh. Since it’s my favourite beverage, I think I manage to complete it within this year. (Cakap besar ho…) 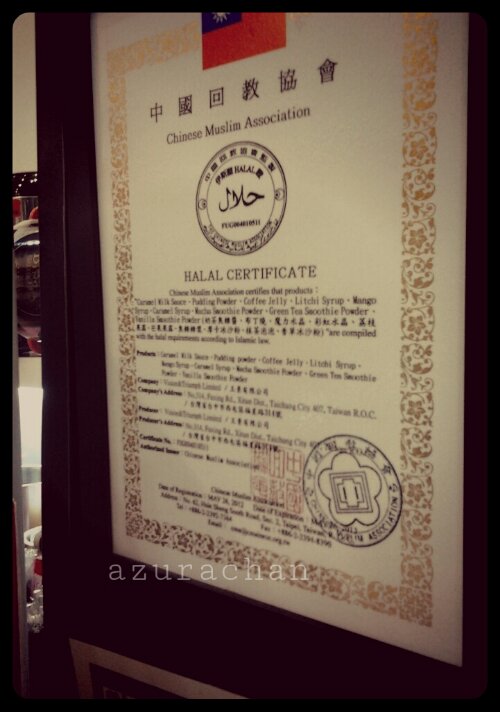 Okay, this is to make people clear about the Halal status. I managed to snap the Halal Certificate on the Ding Tea outlet’s wall. Clear, ok. =) 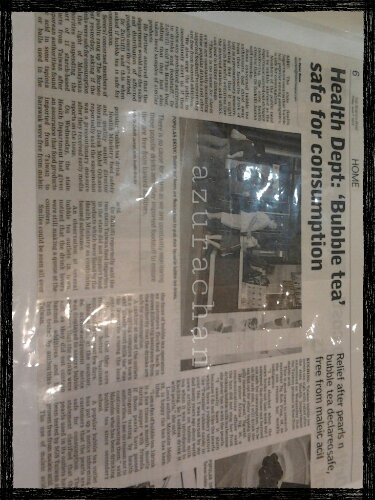 Another rumours I’ve been heard about this drink, the pearls were made from some chemicals which can harm our body. Ok, here I also managed to snap the articles from the outlet’s counter. I wonder how can they assumed it was mix with chemical? The bubbles were easy to make. Just pour hot water into tapioca flour,and make it like a small pearl… and boil it. No chemicals needed.

I wonder why some people always want to condemn on others’ businesses. Especially on Halal status. Please people, especially Malaysian… before you jump into conclusion… revised the facts first. We live in harmony, ain’t we?

p/s: DearDear loves Hokkaido Coffee. I persuaded him to drink it. kikikiki…

I have another craziness. (As my mother once said “Gila ada macam-macam”). 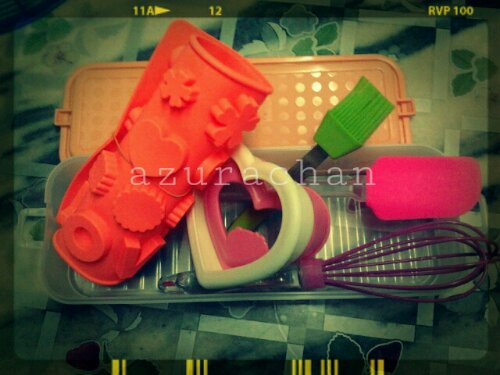 Look how fancy they are. XD
By looking at the colourful utensils, it automatically motivates me to cook or bake. And I will turn on my happy mood in the kitchen. Lol! 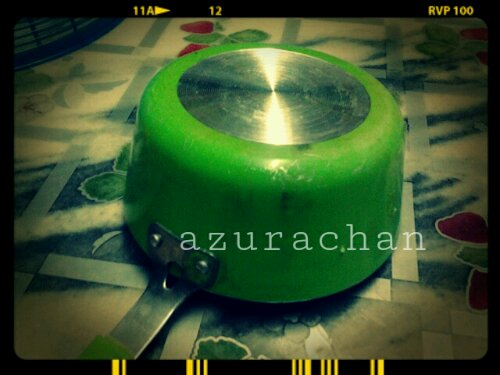 Recently I bought this green saucepan. It’s my favourite saucepan so far. I hesitate to use other pans because this pans keeps attract my attention. Look, how colour can influence you… 😉

When I was still in school, one of my hobby is collecting and swapping postcards with my pen pals or my swap friends.

However, the fun activities stop after I entered college/universities life. Indeed, I missed swapping and writing to pen pals.

Luckily found Sweet Angela from wordpress blog. I saw that she also loves collecting postcards, so we decided to swap postcard. 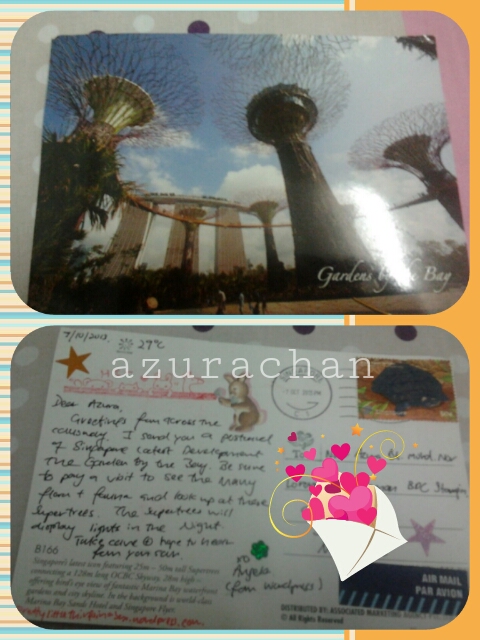 This is the first postcard she sent to me. Thanks dear… am still searching for the right postcard for you. 😉