Hello and good day everyone!

Did you miss me? 😄 I am sorry for not ‘blog hop-in’ to yours lately. I am now adjusting a new time for my routine. So my everyday’s life begins at 5 a.m and ended around 11p.m. Sometimes it dragged me until midnight when my little girl refused to sleep early.

The 18 to 19 hours routine is fully dedicated to my family and works only. I could only chip in times for reading and surfing, including writing blog. (Now I’m in the middle of getting ready to go to work). Where’s my spare time for crafting? That’s another story, I have been thinking to slow down and sacrifice my crafting time. I will only get to do craft ONLY during my FREE time, which is very hard to get. 😥

Therefore on weekend, I need a leisure time. At least a few hours go on outing with my family. Last weekend we brought Amani to the nearest arcade, Molly Fantasy Land at the BDC Everise building. While Amani and DearDear spent times at the arcade, I got the chance wandering around the Popular Bookstore.

Yeah, if you’re still remember I was hunting for birthday book. Got it! Will update about it later. When I returned to the arcade, I saw that both of them really enjoyed their times together.

Eheee… and not forgetting me. This car ride is fun! But my favourite is the basketball game. What about you guys? What’s your favourite game at the arcade?

I hope it’s still not to late to wish a Happy Chinese New Year!! I know mostly my blog friends are celebrating it. 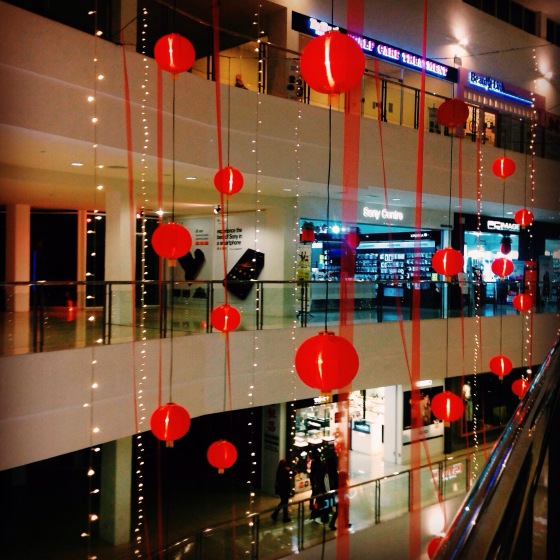 How was the celebration? We did enjoyed watching the fireworks on the new year’s eve. This year I did not go visitting because my knee is not fully recovered. The best way is to rest and stay at home.

Staying at home sweet home, meaning I get times to nurture my babies. This cacti has a new home. I bought the cute froggy pot at Daiso. They are so cute to be together. 🐸

And not forgetting this croccie types of cacti. I’d mix it together with another cacti from Cameron Highlands. Can you see there are Miffy and Kitty, which I stole from Amani and put them together with these cactis. Hehe.

I hope you guys enjoy your holidays! Ciao ~

This year I have double numbers in my age. Thank you for the birthday wishes and some gifts from my friends. I did not celebrate it, because on my birthday my knee pain came again. So I just stayed at home and most of the times lying on my bed. Sad day… 😪 However at night my brothers brought home a birthday cake and KFC take away. How sweet! 😍 Amani was very excited and she sang a birthday song to me. Thank you my brothers…

I love to reward myself during my own birthday. These bracelets were some of them. They are so lovely and I just couldn’t resist myself to buy them. 😁

Another reward for myself is this comfy shoes. Actually I’ve been dreAming to buy Toms’ shoes. Since I couldn’t find any Toms outlet in Kuching, so I opted to buy BUM Equipment instead. It’s okay, ala ala pun jadilah… And please be nice to me, dear shoes. 😌

There is one thing I need to reward myself. My drug. It’s a must. Hehehe. There are some on my lists, I just can’t choose the best of it. Can you help me to choose? I can only buy one book for my birthday month. Here’s the list:-
1. The Bane Chronicles – Cassandra Clare
2. Eleanor & Park – Rainbow Rowell
3. Black Ice – Becca Fitzpatrick
4. To all the boys I’ve loved before – Jenny Han
5. The unbecoming of Mara Dyer – Michelle Hodkin
6. Miss Peregrine’s Home for Peculiar Children – Ransom Riggs

There you go. It’s hard to choose. Lol! 😂 If you have any suggestion or recommendstion, please tell me. Thank you in advance! 😊

Hello my lovely friends and readers…

12 February is my lovey dovey date. It was my wedding anniversary. 💕 I remember getting married during Chinese New Year, and it was raining season just like this year. The picture above was taken during our honeymoon at KK. Look at my expressionless face, lol. It was because I just figured out that I am 14 weeks pregnant by then. 💏 I had experienced with spotting during my early pregnancy, and was advised to have enough rest. Therefore, our honeymoon was kind of like a getaway vacation, instead of sightseeing or going to the islands. I wish to go to Sabah again someday and claiming what I had missed during my last trip. By the way, Happy Anniversary DearDear! 😘 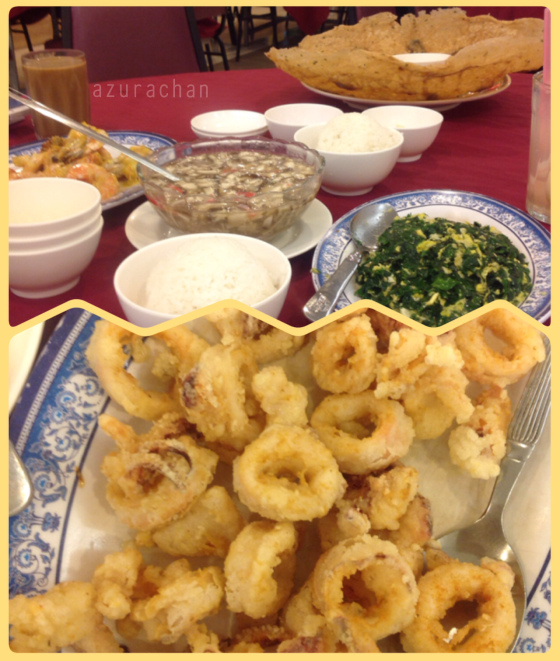 As for this year’s anniversary, we celebrate it at the Bukit Mata Seafood. Instead of going to the resort like last year, the three of us were just had dinner together. We ordered five menus including my favourite – Fried Squids. in the end I couldn’t walk properly due to my full stomach. Lol!

Thanks to the wordpress notifications for reminding me that on 12th February is my blog anniversary as well. It had been 6 years since I started using WordPress. Well, Happy Birthday blog! Thank you for being my loyal listener all this while. 👂

The next day, we went to Mazazu Crepe and had their Japanese crepes. I’ve tried the new menu which is The Chicken Sausage Crepe, but dislike the taste. I would still prefer the Chicken Mushroom Crepe. DearDear was having Nutella with Condensed Milk Crepe. Amani…. well it’s easy to treat her. Just give her a vanilla ice-cream and it would made her day. 🍦

Sorry for the silent.

Last week I had lunch with my besties at the Pizza Hut. It was an occasion for Tikah’s belated birthday treat. It’s like a tradition for us. Whenever one of us had a birthday, we would celebrate it together like this. Just a small lunch gathering among us.

That’s Tikah, the one with circled. Happy Belated Birthday to you!! Love you girls! 😘😘 Till another birthday date, babes. 😄

Last Friday, I was fascinated by The mountain of clouds.

This is what I mean. The clouds look so near, unlike the usual view we always had. The clouds were so high above. But this view is super amazing! Don’t you agree with me? ☁️☁️

Last Monday, we went to the City One mall to meet DearDear’s brother. We met at the arcade so that Amani and Aiesya could spent their times playing together. The last time we met Aiesya was during Hari Raya last year.

Although we are living in the same town, both of them are seldom met. That day, Aiesya was so excited to meet Amani. They were having fun explored the games, especially Amani. It was her first time went to that place in City One. Normally, I would avoid her to go to this place. In the end, the same old story…. she didn’t want to go home. Took some effort to force her to come out from the place. 😅 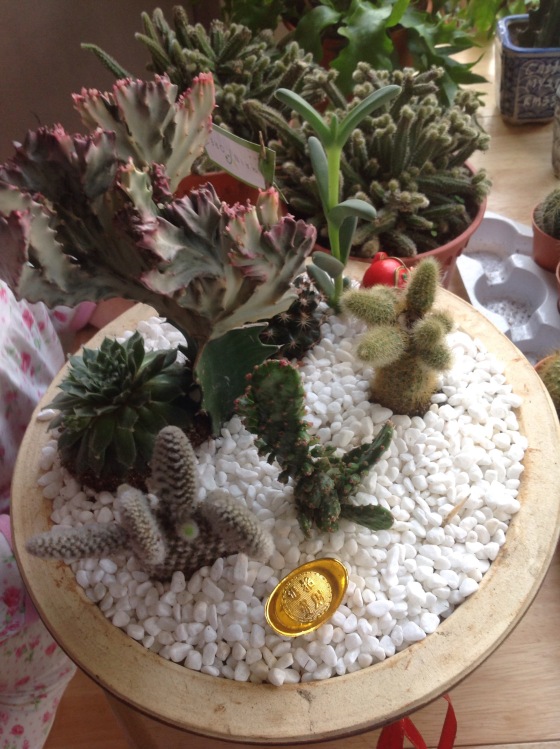 In my last post, I have asked you which roses did I bought? Well, since only one had guessed and unfortunately that’s not the answer. So, there’ll be no prize for everyone. 😔 The above picture was neither the gift nor the cactus that I bought. The cactuses pot has inspired me to make one like that. The pot is cost RM104.++ if you are asking how much. 💸

Ta-da! This is the roses that I bought. I have been dreaming of having my own peach roses all the while. Lovely isn’t it! I love peach roses instead of red roses. Honestly, this is the first time I bought flower potted rose. I’m hoping it to survive well. Therefore I welcome any green fingers pro to give some tips and advice. 😉

And here are my new baby cactis. The one on the left was chosen by me. While the right side was chosen by DearDear. It surprised me when he told me that he would like to have one for himself. Wow! New hobby?

I bought three cactis that day. The third one is the one that in the middle of the two coloured cactis. I saw this type of cactus at Cameron Highlands before but I didn’t bought it that time. It took a risk to bring home. Couldn’t bear to watch it broken . haha. Luckily I found this type again. I just grab it for instance. 🌵

It’s so addictive! I even have set to mind what to buy next. muahahaha 😂