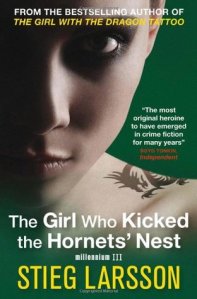 December 2012 Drug : The Girl who Kicked the Hornets’ Nest by Stieg Larsson

This is the third book from the Millennium Series. It took awhile for me to diges and finished the second part of this series. Nak muntah! Since the ending was ‘hanging’ so I decided to move on to the last part of this series and after that I’m free from Lisbeth Salander’s world. Frown face mode ON!

I signed up the Goodreads a little bit late this year. And then I took part of the Goodreads Reading Challenge in the middle of the year, so I challenged myself to read about 25 books for this year. I made it! The 25th books I read is The Girl Who Played With Fire by Stieg Larsson.

Moving on moving on!

Welcome November.  Finally I could sit back and relaxing my mind with the final book of The Trylle Series.

Had a sneak peek at the end of the book (my bad habit… ;-p), I think I’m going to love the ending. weheee!

p/s: My review of the last book I’ve read : The Girl with the Dragon Tattoo review.

When Wendy Everly was six-years-old, her mother was convinced she was a monster and tried to kill her. It isn’t until eleven years later that Wendy finds out her mother might’ve been telling the truth.

With the help of Finn Holmes, Wendy finds herself in a world she never knew existed – and it’s one she’s not sure if she wants to be a part of.

There are a few editions of Switched cover..

I almost bought the last cover (US version) but thought that UK version would be more cool. hehe.

Ok, let’s begin with the review.

The keyword to this story is “Trylle”.  Trylle Trilogy.

At first I wonder what is the meaning of Trylle.

Forget about the vampire series. It’s all old school already.

Yes, if you get it. Troll : “Flashy colorful hair, small, ugly, big eyes. In Amanda’s world, these are all misconceptions. They’re called Trylle, and they’re beautiful, magical and on the brink of extinction.”

And there were some side characters which were also strong & unforgettable.

If you’ve been missing of your teen spirit era, try reading this book.

I think I haven’t read a high school based story for ages, that’s why sometimes I thought I was still sweet 17 while reading this book. Muahahahhaa.

There are sequel to this book. ‘Torn’ and ‘Ascend’

Tabik spring with the author : Amanda Hocking. She first writing/published this story only through e-book. Now she sold multi-million books.

So the hard work was paid enough.

I found a trailer made for this book.

Well, Wendy was more beautiful than my imagination from this trailer. But Finn, as I imagined much looks like Adam Levigne. Muahahhaha… (Mesti nak mejin juak..) In this trailer his face doesn’t look so… Finn. read the book and you know how does the Finn’s character was.

I’m looking forward for this book to become a movie. Maybe it can beat the Twilight Series.

Sure there will be :

p/s: Happy Mother’s day to mommies all over the world. Special entry coming up tomorrow!