Hello AC readers…
Back to work!
Today is going to be a Wednesday blue, after a long holiday (for those who stayed in Sarawak). I should have filled in my holiday with so many craft and unfinished projects. But I didn’t! Not because of the laziness… It was because of my full attention had to switch to this little Princess. x)

Which was.. a troublesome sometimes. Last Monday, I received a parcel from my aunt in KL. It was a surprised when I heard the poslaju van honking in front of our house. So I asked the delivery man, he didn’t took a day off that day? He told me he had nothing to do so he just took an overtime to deliver the parcel. Great! Praised to that man. That is called a commited worker!

Speaking of the parcel, yes as you can see from the picture above… it was Princess Ana of Frozen from the parcel. Amani was so excited to see it. Me and DearDear used to tell her that Princess Ana was just like her. A bit naughty and and playful. Hehe. She told me Elsa was me. I guessed because of the fierce face of Elsa that might remind her like her mama. muhuhu.

Anyway, thanks to Aunty Nor for the thoughtful gift for her ‘cucu’. hihihi. 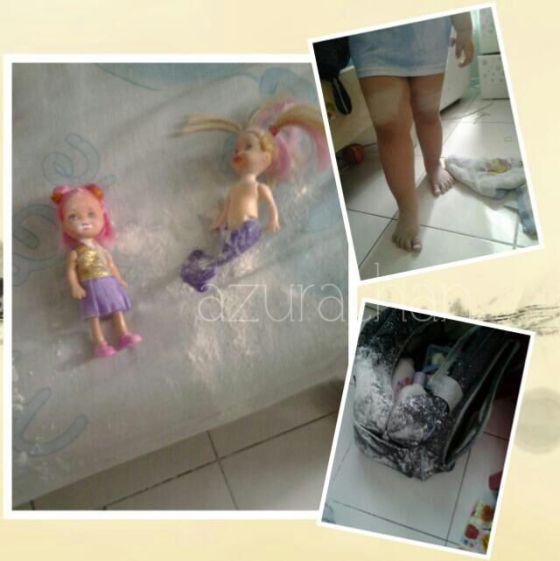 Sometimes I think the Frozen film was a spoilt to children. Look at the picture above. Frozen overload? I only left her for about 5 minutes (to run into the toilet) and when I was back, I saw that my room had a snowfall…. Perhaps Ana had made Elsa gone mad and she froze everything!

Oh my goodness! I feel like to runaway and cry! And… I should sing “Let it go” at the moment I run. muhuhu…. If you were in my position, how do you feel? T.T

Hola AC readers!
Remember that I promised you that I’ll update on the #yourcitymailproject? Yeah, I’m keeping my word.

So I have received the first envies from my partner, yesterday. I was so excited to have it. It was so much fun reading the facts and ‘tour’ araound Forestburg. I can picture the very peaceful city. Although my partner mentioned it is just a small city, but I find it is still an interesting place to visit. I would prefer living in a quiet town rather than facing a hectic city lifestyle indeed. This place reminds me of some places here like Mukah, Sarikei, Sri Aman….

I’m hoping my parcel has reached you Megan. I have prepared some stuff to include in the second envies. Yeay!!

Hello AC readers! How are you spending the weekend?

Last week, I have received a parcel from Singapore. When I flipped on the other side to see that the sender was Angela or Wisher. I was so happy when I know it was from her because from my past experienced, she would never let you down with her parcel. 🙂

It was a surprise gift from her for taking part with the Happy Spring Blog Hop 2014. Owh… you shouldn’t have…

How can you’re not excited when seeing those beautiful gifts in your parcel? I love the Sakura embroidery and the cutie charms the most. Not forgetting the cross stitch threads and some candies. Thank you very much Angela! You are very sweet and generous. I’ll make sure to send you something in return. 🙂